You are here: Home / Destinations / A Day at the Maryland Zoo in Baltimore Baltimore, Maryland is a city replete with charm and grit. When I think of this seaport city, I can almost smell frying crab cakes in the air, see visitors walking down the picturesque cobblestone streets of Fells Point, and hear the waves crashing along the Inner Harbor.  Baltimore can boast of a very long list of top-rated, must-see attractions…one of my top kid-friendly activities is the Maryland Zoo!  This Zoo is beloved by locals and tourists alike.

The Zoo, which is located in Druid Hill Park, is the third oldest zoo in the United States. It’s home to more than 2,000 creatures and the animal habitats are organized by geographic regions. There is the Maryland Wilderness, Polar Bear Watch, and African Journey. The Maryland Zoo gave my family tickets to explore the habitats in the new African Journey Exhibit. Austen wanted to make sure she didn’t miss a thing.

The Maryland Zoo is really big (135 acres).  So, it’s best to take a minute to look at the Zoo map and create a plan.  Before we started exploring, we took a minute to figure out our strategy for the day and determined which animals we really wanted to encounter. Fortunately, we spent the bulk of our time checking out the African Journey Exhibit.

Here are a few fun aspects of the Maryland Zoo’s African Journey that you will want to see and experience for yourself! After getting through the entrance, we took a short shuttle ride to the African Journey section of the Zoo.  I’m not sure why, but my kiddos were really excited about riding the shuttle.  They even insisted on picking their seats. Once we got off of the shuttle train, we were greeted with a huge welcome sign. A short walk later and we were face-to-face with African Penguins.  The Penguin Coast Exhibit is a large outdoor exhibit.  There were a couple of keepers on-hand sharing their knowledge about the breeding and behavior patterns of the penguins. Austen attempted to talk to a few penguins as they swam by.

The entrance to the African Journey Exhibit is only a few steps away from the Penguin Coast habitat. My kids were interested in the flamingo habitat for two very different reasons.  My 2-year-old daughter loved the birds’ beautiful pink plumes (she’s partial to anything pink or purple).  While Aubrey, our 5-year-old, loves to watch and imitate the flamingo sleeping stance. Based on our observations, flamingoes balance on one leg and tuck their heads under their wing. The elephant is Aubrey’s favorite animal, so we spent extra time enjoying this exhibit. We stopped to watch an elephant take a mudbath. While we were watching, a zookeeper came out to feed the elephants.  She even took the time to answer questions about the pachyderms.

5.  Check Out the Giraffes

The Giraffe Habitat is located directly across from the elephant enclosure.  The Maryland Zoo has a total of four giraffes (three females – Kesi, Anuli, and Willow and one male – Caesar). Lions Hasan and Zuri relaxed as the kids watched intently.

Plan to spend some time watching the King and Queen of the Jungle as they lounge. Hasan decided to get up to get a closer look at his guests.

These regal creatures are nocturnal so we didn’t expect much action.  But while we were watching, Hasan got up to take a closer look at his guests.  Both kids were very excited to see a lion this close.

7. Hang out with Monkeys We took a walking tour of the Chimpanzee Forest.

There were a variety of animals housed in the Chimpanzee Forest.  In addition to chimpanzees, there was a lemur habitat as well as an aquarium with a crocodile lurking in it. Have you been to the Maryland Zoo in Baltimore?  What was your favorite exhibit? Please leave a comment below.

*Disclaimer: We received complimentary tickets from the Maryland Zoo in Baltimore.  All opinions are my own. 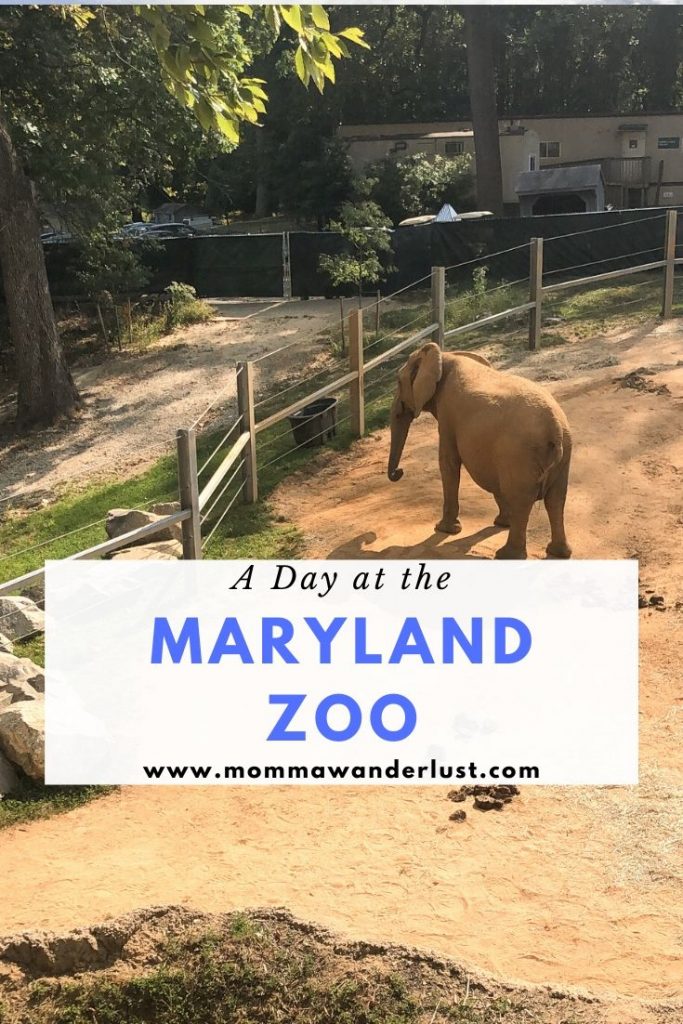